The store will not work correctly in the case when cookies are disabled.
Can we use your data to improve your web experience and tailor ads for you? Farrar & Tanner and our service partners will collect data and use cookies for ad personalisation and sales tracking. By continuing to use this site you agree to accept these cookies. For more information, please see our Cookies Page.
Departments
Thank you for subscribing to our newsletter
Sorry, Something went Wrong 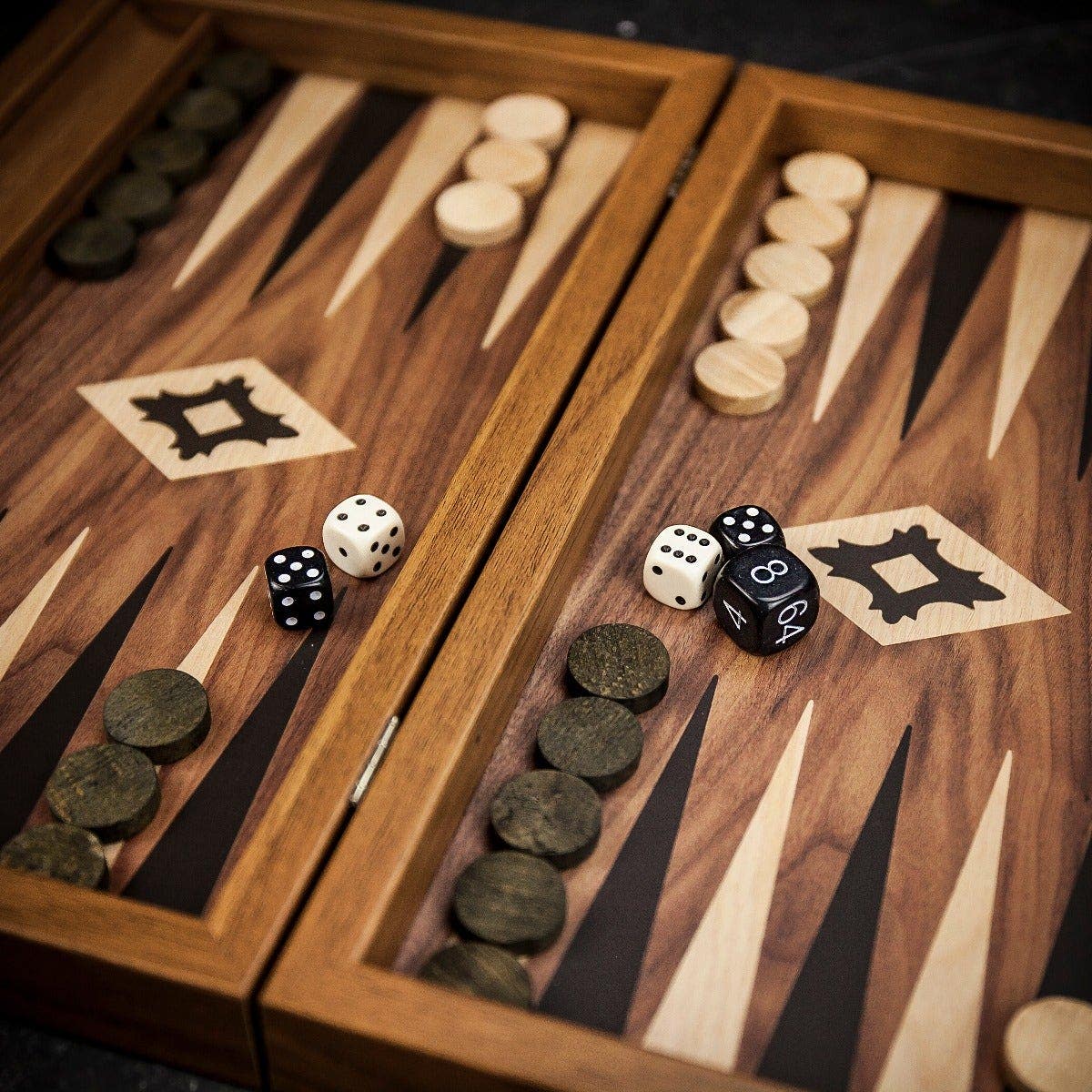 Backgammon – Set Up and Rules of Play

A competitive game for two players, backgammon has been a popular choice for centuries. Played on a folding wooden board with checkers and dice the object of the game is to remove all your checkers from the board.

5. Doubling  6. Gammons and Backgammon  7. Choosing Your Board

The points are numbered from one to twenty four, beginning at the outer edge of each player’s home board. Checkers are arranged with two on point 24, five on point 13, three on point 8 and five on point 6.

To start the game both players roll a single die, the player with the highest roll begins.

Checkers are always moved towards your home board onto a point of a lower number and can only be moved onto an open point. An open point is occupied by no more than one of the opponent’s checkers. To move one checker using the total of the dice roll, the intermediate points must be open points. In this example the fifth or third point must be open.

A blot is a point occupied by a single checker. If a blot is hit during the opponent’s play it must be placed on the ridge along the centre of the board, known as a bar. If a player has any checkers on the bar, these must be entered into your opponent’s home board during your next turn. Checkers are entered onto an open point corresponding to numbers rolled. For example, if a 6 and 4 are rolled, the checker must be placed on point 6 or 4 of the opponent’s home board.

When a player has all their checkers in their home board, they can start removing them from the board, known as bearing off. This is done by rolling both dice and removing a checker from each corresponding point. For example, if a 6 and 4 is rolled, a checker can be removed from point 6 and 4. If there are no checkers on point 4, one must be removed from a higher numbered point. If there are no checkers on a higher numbered point, you must remove a checker from the highest numbered point available.

Checkers can still be hit while bearing off and must be placed onto the bar and entered back into play as detailed above. When a first player bears off all of their fifteen checkers, the game is won!

Backgammon is played with an agreed stake per point and each game starts at one point. If a player has built an advantage, they can propose doubling the stakes at the beginning of their turn before rolling. The opponent may refuse the double however concedes the game and pays one point. The doubling cube is used to track the current stake.

When a game is won, the loser could be in a number of positions. If the losing player has removed at least one checker from the board while bearing off, they lose the value shown on the doubling cube. If no checkers have been borne off, the player is gammoned and loses twice the value of the double cube. At worst, if the losing player has borne off no checkers and has checkers on the bar, they are backgammoned and lose three times the value of the doubling cube.

At Farrar & Tanner we have a beautiful and diverse selection of backgammon boards to choose from, whether for yourself or as a great personalised gift. So how do you choose your perfect board?

We’ve looked at the different options in more detail in our “Choosing Your Backgammon Board” blog.